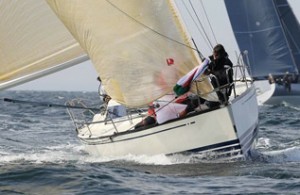 ICRA, The Irish Cruiser Racer Association has come up with a new flexible approach to the question of class divisions.

As reported last month on afloat.ie said that at ICRA’s last executive meeting the decision was made to promote to all boat owners especially those who may not have competed in the past such as X 332s and Beneteau First 31.7s for example.

In reviewing its approach the cruiser body decided its classes divisions are too pre-determined by ‘traditional’ class divisions in major yacht clubs.

In open events it is necessary ‘to cut your cloth according to your measure’ – you manage the boats you have and you do not base divisions on boats that do not even turn up for the event’ says ICRA’s Denis Kiely, the national handicapping officer.

Denis Kiely says 10/15 boats is an optimum number for good competitive sailing with five boats being a minimum. In fleets above 20 Kiely maintains there should be serious consideration for two classes. Overall smaller classes will give tighter TCC bands where IRC works best.

Mr Kiely hopes this will encourage greater turn outs and points to the present typical class 1 that has 2 quite distinct groups in it – the top group consisting of Corbys [33], Archambaud 35s, J109s etc [ avg TCC .1035ish] and a lower group of X332s, etc [avg TCC somewhere around .990]. The bottom group boats are not turning up because they feel they have no fair chance against the top group.

ICRA Commodore Norbert Reilly is to appoint an ICRA Rep in each club to help roll out this and other ICRA initiatives.