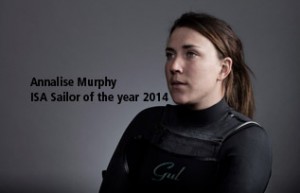 Annalise Murphy made Irish sailing history last night when she won the most coveted and prestigious Irish sailing award – ISA Sailor of the Year – for the third consecutive year. The award, supported by MGM Boats, was presented at the ISA Awards Ball in the Royal Marine Hotel, Dun Laoghaire, Co. Dublin before an audience of 270 members and supporters of Irish sailing from all corners of the country.

The 23 year old Rathfanham woman fought off stiff competition from two Corkonians to claim the sought-after award. Philip Bendon; Youth European Match Racing Champion and David Kenefick; Rookie Offshore Racing Champion both had incredibly successful seasons in 2013 but they couldn’t reign supreme against the might of the female star of Irish sailing.

Murphy’s career to date has spanned numerous international titles and in 2013 she added four more medals to her trophy cabinet. Annalise kicked off the summer season with two Gold medals in as many weeks, first at the Italian Olympic Week and then in Holland at the Delta Lloyd Regatta. A month later she took Bronze at Sail for Gold in Weymouth, the home of her bitter Olympic disappointment only 12 months prior. Up next was the Laser Radial European Championship in September where the pressure was really on for Annalise to perform in her home waters of Dun Laoghaire. With all eyes on her, Annalise certainly didn’t disappoint scooping the European title after six days of racing with a staggering 22 point lead.

Annalise is currently training in Spain and was unable to accept the award in person but she thanked her supporters via video link. Speaking about her win Murphy remarked “I’m honoured to be awarded ISA Sailor of the Year. I had a really great year in 2013 which was capped off by winning the Laser Europeans which was pretty special. It was definitely a good way to start the 2016 cycle. I’d like to thank Providence Resources, our team sponsor, for believing in us and the Irish Sports Council who have supported me since I was a teenager. I’d also like to thank the ISA and my coach Rory Fitzpatrick in particular as well as my family. Without their support I wouldn’t be able to do this“.

In order to support the tireless work of the RNLI an event collection yielded over €1,500.