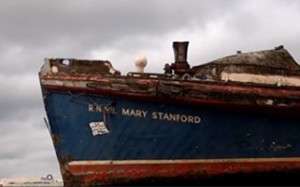 The former Ballycotton RNLB lifeboat, Mary Stanford, has completed the first part of its long road back to greatness in restoration after it was taken from its watery berth in Dublin back to its home in Cork this week.

“She was made famous for the rescue of the Daunt Lightship crew in 1936 and as previously reported made her final farewell on Saturday in the Ringsend basin, albeit on the short-hop from Charlotte Quay to the slipway.

“On board her last hurrah were relatives of the coxswain, Colm and Aidan Sliney as well as the nationwide crew.

“From working on her getting her ready for the lift it was clear to see she is made of hardy stuff.

“The raising of the boat was witnessed by the local community and to whom also lifted the spirits of the occasion.

“At 4pm the crane took over making the transition from sea to land seem effortless thanks to skilful operator and the loading onto the truck. Her journey saw her safely delivered 12 hours later into the early hours of Sunday.

“With support of a campaign, she is to be restored and located on a plinth overlooking the coastal path at Ballycotton, to where she was stationed with the RNLI.

“With a little love the Mary Stanford will out-live us all.”